How to Always Defeat atheists in debate 100% of the time


How to Always Defeat atheists in
debate 100% of the time...

I have debated over 70 atheists and when I say "debated" I mean in structured and official debates and not just casual conversations.  I love debates and here is why.  In a debate the audience really can see how full of crapola atheism really is.  It's like this....atheism tries to present itself to the world as rational and intelligent but when atheism goes up against Christianity we see a different story.
What we see is atheism being shown to be the clown it really is and what you can do in debate is get this clown by the scruff of it's neck and force it to look into the mirror at himself and when atheism is shown in front of the mirror it sees itself with a big red hair afro and a big red nose and when it looks down at it's feet it sees giant red floppy shoes and when the atheist looks in the mirror it finally sees himself  in all his polka dot clown glory and finally at last realizes that "Atheism is a clown and didn't even know it"...but you should expose atheism for the despair and madness it is.
So in debate I like to frame the debate like this.  I start off by sharing how I was an atheist (as a kid) and I left atheism "Due to the lack of evidence" for atheism.
What this does is show that I left atheism because there are no good arguments for atheism and #2 it demands that my atheist opponent (Mr. Bozo to be) must give me good evidence for atheism.  But alas my friends...this is where atheists fail.  You see my friends, atheism lacks proof and evidence that it is accurate and correct and thus the atheist must have a magical mystical "blind faith" view that atheism is true since it is a fact that ATHEISM LACKS EVIDENCE.   To demonstrate this hilarious feat I called into an atheist radio show (Hear the video below):

Part 2 When they admit they have no evidence ...


Now it is refreshing to see other Christians using this method.  Recently agnostic Matt Dillahunty (he says he is agnostic now as he has moved from atheism to agnostic) admitted that yes God can exist.  Now what you will see in this video below is Agnostic Matt Dillahunty losing the debate to Christian Cliffe Knechtle.  In the debate Cliff challenges Matt to give some proof and evidence of why he thinks atheism is true and Matt Dillahunty admits he cannot do it.  In essence Matt admits that he has sort of a blind faith atheism.
In fact Matt nervously moves around in his chair when challenged to answer that question.  Matt then pulls a page out of the "Hitchens stall tactic" chapter and tries to stall for time even asking "What was the question again?"  It was quite embarrassing for Dillahunty but this is what happens when the atheist is forced to look in the mirror.  We don't like to hurt the atheist's feelings when they are shown to be a clown rather we are trying to show them how atheism is madness.  They know it, we know it and the reader of this blog knows it.   See the video of Matt Dillahunty losing the debate below.


So every year ShockofGod challenges atheists to answer this question.   "What proof and evidence can you provide that would finally at last prove that atheism is accurate and correct?"  So far it's been over 7 long years and no atheist, no not even one, has been able to prove that atheism is accurate and correct.   The reason is that truth even being crushed to the earth will rise again but no lie can live forever.  Atheism is sin.   Atheism is evil and Atheism is madness.  If any of your friends say it is kind and loving show them this chart.  Atheism is bloody and murdery. 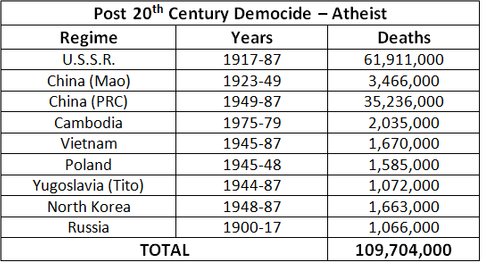